US to Develop 'Indo-Pacific Economic Framework' 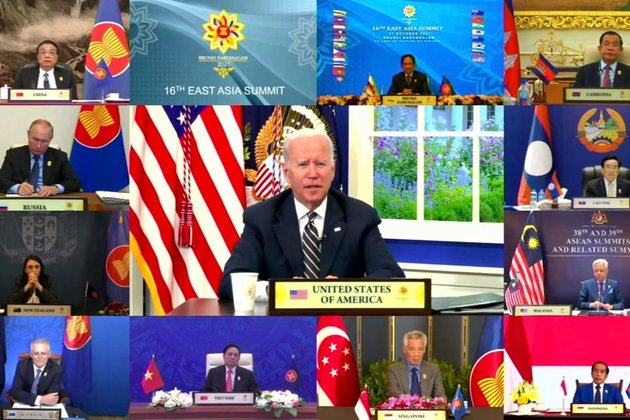 WHITE HOUSE - The United States plans to 'explore with partners the development of an Indo-Pacific economic framework,' the White House announced Wednesday, as President Joe Biden reentered East Asian diplomacy by attending a virtual meeting with power players in the East Asia region.

The White House has not given further details, stating only that the framework will "define our shared objectives around trade facilitation, standards for the digital economy and technology, supply chain resiliency, decarbonization and clean energy, infrastructure, worker standards, and other areas of shared interest."

While no formal policy has been established, the announcement could help address concerns that the U.S. is lagging behind China in regional trade ties. Washington is not part of the Regional Comprehensive Economic Partnership, the Beijing-backed free trade agreement among Asia Pacific countries which covers nearly 30% of the global economy.

'The administration knows that economic statecraft is a big weak spot,' said Greg Poling, an analyst specializing in Southeast Asia at the Center for Strategic and International Studies. 'What most of the region wants is for the U.S. to rejoin the CPTPP, the successor to the Trans-Pacific Partnership. That ain't going to happen.'

That, he said, leaves the U.S. with fewer options, like this new framework.

'I don't think anybody's buying it, but I think this hodgepodge of economic initiatives is the best they can do given the political realities in Washington,' Poling said.

This decision was announced after Biden's participation Wednesday morning in the virtual East Asia Summit, which more deeply immersed the U.S. into regional diplomacy after a four-year U.S. presidential absence. The group shared concerns like China's growing ambitions, growing North Korean belligerence and the aftermath of a coup in Myanmar.

The annual East Asia Summit convenes 18 countries - including the United States, Australia, China, and Russia - and is spearheaded by the 10 countries of the Association of Southeast Asian Nations.

The fact that the U.S. is willing to participate in an institution led by smaller powers such as ASEAN is noteworthy, said Aaron Connelly, a research fellow at the International Institute for Strategic Studies. "It shows the degree of deference and respect for their equities that is pretty rare on the part of the United States."

This is the first time in four years that the U.S. president has participated. Former President Donald Trump delivered remarks at the 2017 summit but left before the talks began and later sent high-level officials in his place.

In this image released by Brunei ASEAN Summit, South Korean President Moon Jae-in speaks in a virtual meeting of ASEAN-Plus Three Summit on the sidelines of the Association of Southeast Asian Nations (ASEAN) summit with the leaders, Oct. 27, 2021.

This summit is held after the annual ASEAN leaders' meetings, which this year were also held virtually, and which Biden also attended. Attendance at this event used to speak volumes, said Julian Ku, a Hofstra University professor who focuses on international disputes and law.

"Usually the East Asia Summit is a big deal in terms of analyzing who shows up, and the United States has been long accused of just not paying enough attention to it, compared to, say, Europe and the Middle East," he told VOA. "It's a little different this year, because it's virtual. So it's not that hard to show up ... this has always been a symbol or a signal for how engaged the United States is in East Asia, and particularly Southeast Asia."

On Tuesday, Biden met virtually with nine of the 10 ASEAN leaders at their annual meeting, at which he announced plans to provide up to $102 million to expand U.S. strategic partnership in the Indo-Pacific region. One head of state was not allowed to attend, even virtually: the junta military leader of Myanmar, who seized power in February.

Ku said Myanmar, which was discussed during the ASEAN summit, is likely to come up again among leaders with interests in East Asia. But they may not be able to bite off the meatier issues, which include China's increased military activities in the South China Sea, Beijing's stance toward Taiwan, and regional policies on issues like weapons testing.

"Usually the hard issues like China or what China's doing here and there - that's not something they can handle at the East Asia Summit," Ku said. "Something like Myanmar, which is a somewhat smaller issue, is at least something they can at least try to make some progress on."

U.S.-Chinese diplomacy is further complicated by the fact that Chinese President Xi Jinping has effectively withdrawn from all international events, and has not set foot out of his country for more than 630 days. In recent months, Xi has scarcely been present even at virtual events, sending other officials to major diplomatic dial-ins such as a September meetup with G-20 leaders to discuss the looming humanitarian crisis in Afghanistan. 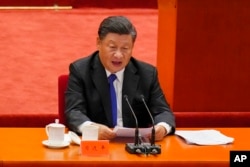 Chinese President Xi Jinping delivers a speech at an event commemorating the 110th anniversary of Xinhai Revolution at the Great Hall of the People in Beijing, Oct. 9, 2021.

Earlier this month, the White House said the two leaders would meet virtually, but when asked this week when that might be, National Security Adviser Jake Sullivan gave no date, saying only that it would be "before the end of the year."

"All I can say is, from the U.S. president's perspective, President Biden does believe it's important that he have the opportunity to have a face-to-face engagement with Xi Jinping," Sullivan told reporters this week.

"And if it's not possible in person because of Xi's travel constraints, doing it by virtual meeting is the next best thing. That's what we're intending to do. And we're intending to do that because, in an era of intense competition between the U.S. and China, intense diplomacy at the highest levels, leader-level diplomacy is vital to effectively managing this relationship."

Normally, the leaders of China and the U.S. would cross paths at any number of major annual events, such as the upcoming gathering of the world's 20 wealthiest nations, or the United Nations' climate conference. Biden will travel to both of those events starting Thursday; Xi does not plan to attend either one.