No. 18 Wake Forest visits BC, bids for berth in ACC title game 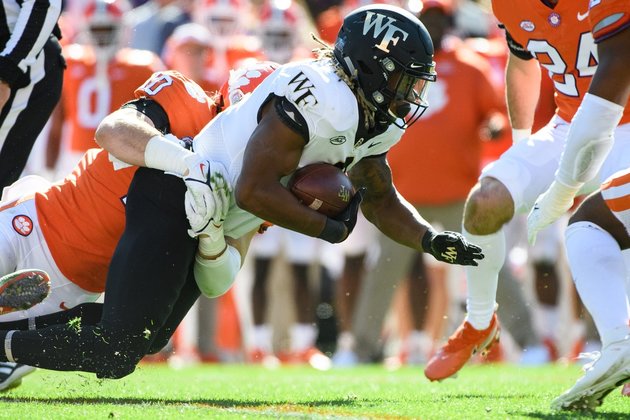 No. 18 Wake Forest will look to punch its ticket to the Atlantic Coast Conference championship game with a win over Boston College in the regular-season finale for both teams on Saturday in Chestnut Hill, Mass.

The Demon Deacons (9-2, 6-1 ACC) control their own destiny as a win over the Eagles would secure their first trip to the conference title game since 2006.

However, Wake Forest has been trending in the wrong direction with losses in two of its last three games.

Last Saturday, the Demon Deacons were blown out in a 48-27 defeat at Atlantic Division rival Clemson. The loss dropped the Demon Deacons eight spots in the College Football Playoff rankings released on Tuesday.

Clemson would qualify for the ACC title game with a win and losses by both Wake Forest and North Carolina State. The Wolfpack would earn a spot in the championship matchup with a win and a Demon Deacons' loss.

"You tell me that we're 9-2 going into Boston College, playing for an ACC championship, I can't tell you that I wouldn't be excited and fired up -- so that's got to be the mentality," Wake Forest quarterback Sam Hartman said.

Hartman completed 27 of 43 passes for 312 yards, a touchdown and an interception in the loss to the Tigers. A.T. Perry reeled in five catches for 113 yards and Jaquarii Roberson had six receptions for 93 yards.

Wake Forest ranks second in the ACC in scoring, averaging 43.1 points through 11 games. Defensively, the Demon Deacons have allowed the fourth-most total yards in the ACC at 449.4 per game.

"You can't do anything to change what happened last week," defensive lineman Miles Fox said Tuesday. "Practice has been good, (BC is) a very good team, and we just have to make sure that we correct those mistakes."

Boston College (6-5, 2-5) had its momentum halted in a 26-23 home loss to Florida State last Saturday. The Eagles had won two straight since the surprise return of starting quarterback Phil Jurkovec from a potential season-ending hand injury.

Jurkovec was held to 148 yards passing (10-of-24) with a touchdown and an interception while rushing for 59 yards and a score against the Seminoles.

BC fell behind 26-3 early in the third quarter before mounting a comeback. Jurkovec led a 14-play, 64-yard drive spanning 6:18 to drive the Eagles into Florida State territory before tossing a pick on fourth-and-9 to end the rally.

Once a season filled with ACC title game aspirations of its own before Jurkovec's injury, BC will now be looking to avoid a .500 season while bettering its bowl standings in the finale against Wake Forest.

"For a lot of people, it's their final (regular season) game. So we want to make it a good one," Jurkovec said Tuesday. "We want to send people off with a win."

Jurkovec said he isn't quite back to full health, but that his grip strength "feels good" heading into Saturday's game.

Eagles coach Jeff Hafley knows his team will have to be ready for a quarterback playing the best football of his career in Hartman.

"Very explosive offense," Hafley said. "They want to throw the ball more than anybody that we've played down the field, which in my opinion starts with the quarterback."